Wondering Where the Best Places to Live or Retire on Southwest Florida’s Beautiful Gulf Coast Are? 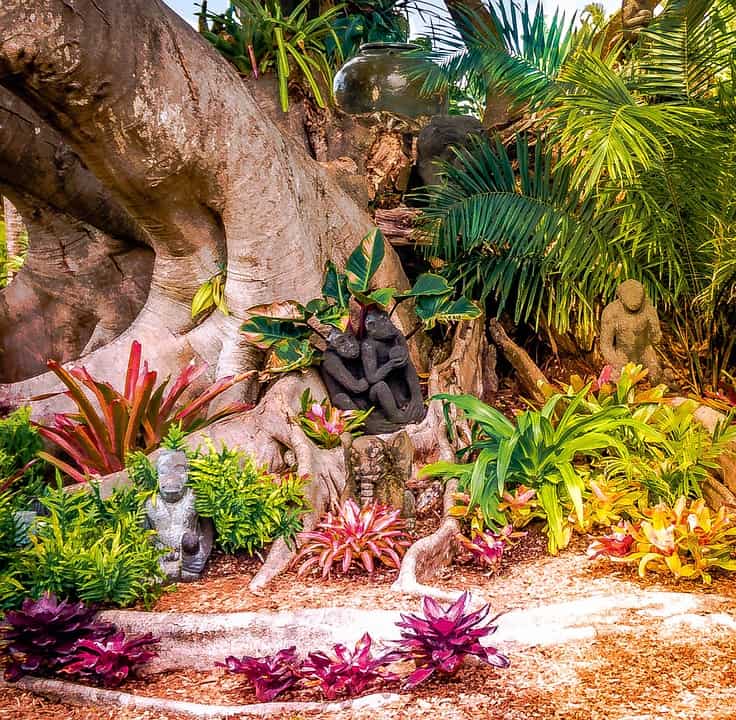 A Banyon Tree Common to Southwest Florida in Bonita Springs.

Bonita Springs is located just north of Naples Florida and about a half hour south, driving from Fort Myers. Bonita Springs offers residents and tourist many parks involving islands and beaches such as the Bonita Beach Park, the Barefoot Beach Preserve Park, Little Hickory Island Beach Park, Lovers Key State Park and others. That’s why Bonita is also on our Best Places to Live in Florida for the Beach list.

Bonita Springs may be an ideal place to raise a family in Florida because student test scores here are about 10% higher than the Florida or national average, despite having slightly higher student to teacher ratios. Crime rates are low here and there’s more shopping dining and entertainment options than what you find in most cities this size in Florida.. At the time of this writing, median home prices in Bonita Springs were about 50% higher than Florida’s overall, which is not bad for the high quality of life and beaches this small city offers.

Cape Coral Florida has 100’s of Miles of Canals With Access to the Gulf.

Cape Coral Florida is located next to and separated from Fort Myers Florida by the Caloosahatchee River. It’s one of the fastest growing areas in Florida due to the still high number of vacant lots that are ready for builders to buy and construct brand new construction homes. Because of this large supply of lots, builders are able to offer brand-new homes sooner in Cape Coral for lower prices than just about anywhere else in Florida.

Cape Coral itself does not have Gulf beaches but you could be laying on the sand listening to the surf with just a short drive. Cape Coral also has hundreds of miles of canals and thousands of waterfront homes with boating access to the river and Gulf of Mexico by boat. 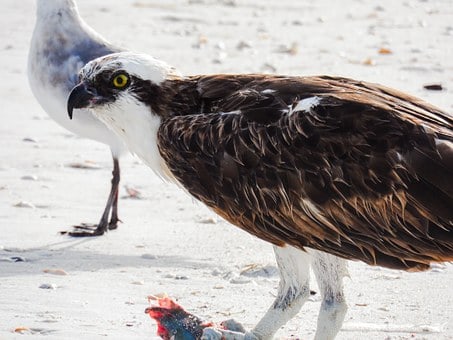 An Osprey Common to Southwest Florida.

as stereo Florida is located on Southwest Florida’s coast about a half hour drive south from Fort Myers. The 10,000 acre Etereo Bay preserve state park is offers all kinds of water sport activities in calm clear warm water such fishing, kayaking and sailboarding. Biking is also popular here. 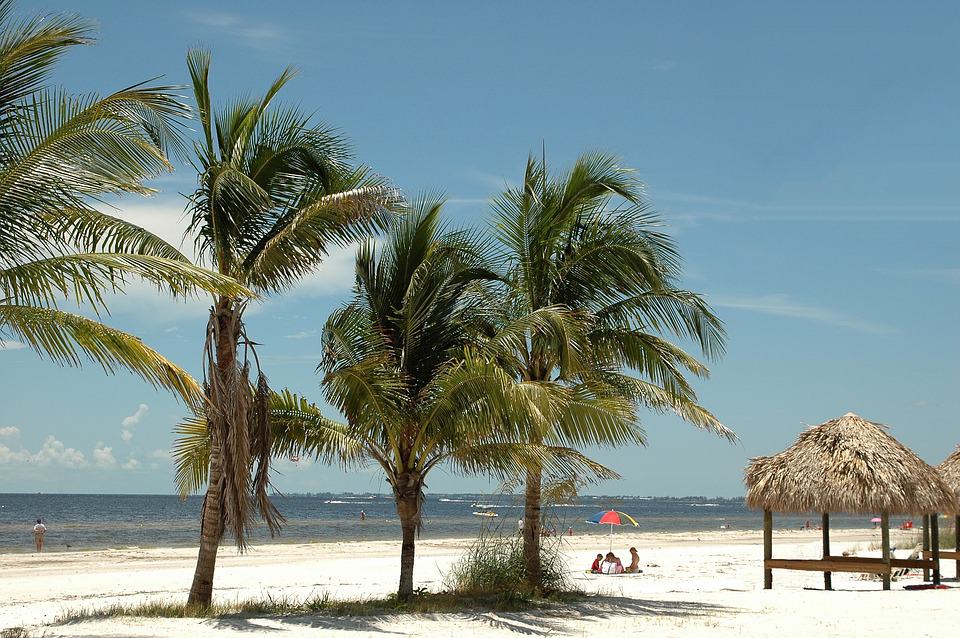 Fort Myers Beach is a short distance from the major city that it gets his name from, but there’s a world of difference between the two. Fort Byers Beach has across-the-board high quality of life ratings. It’s one of safest places to live the US. Students here have a test scores.

Fort Myers Beach has more places to dine or get a drink for the size of the town than other places in Florida. Of course it’s just a short drive to Fort Myers when you desire more options or to access a major employment market.

Like all towns Florida with “beach” in the name that offer high quality of life scores, Fort Myers Beach home prices are not cheap. They’re more than double the national and Florida average. But in areas like this where you can walk from many of the homes to the beach, you’re not just buying a home, you’re buying a lifestyle. Most people only dream about living in such a place.

People Enjoying a View of the Bay on Marco Island.

Student test scores here are among the highest in Florida. There are more shopping and dining options per capita located on this island than similarly sized towns elsewhere in Florida. In a recent year this island town 17,000 people that attracts lots of tourist, had only two reported violent crimes in the entire year. Property crimes here are also just a fraction of the national average, happening at a rate of about 80% lower than the national average. Marco Island would be an excellent place in Florida to call home, but it’s not for everyone because housing cost are more than twice the national and Florida average. 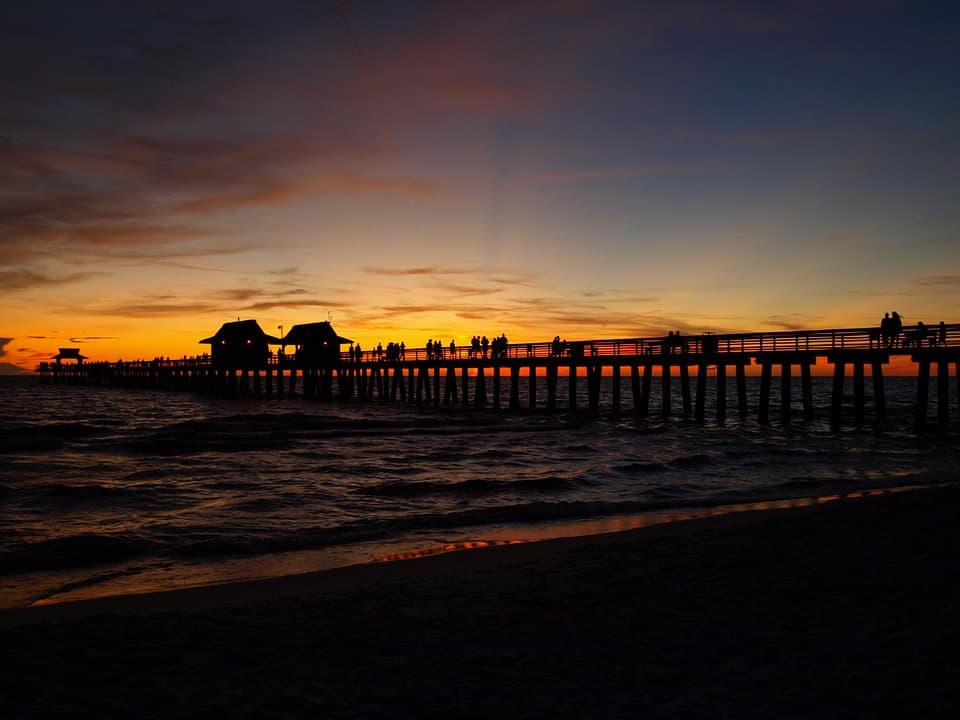 Naples Florida is located on Southwest Florida’s Gulf Coast about an hour drive south of Fort Myers and about two hours from Miami by way of the I-75 also known as Alligator Alley in this part of Florida because it runs through the everglades. Naples is a nature lover’s paradise with easy access to the Big Cypress National Preserve, Corkscrew Swamp Sanctuary, Everglades National Park, the Florida Panther National Wildlife Refuge, the 10,000 Islands national life wildlife refuge and Picayune Strand State Forest. If that wasn’t enough, Naples also has Gulf of Mexico white sand beaches.

Naples is also a place for upscale dining, shopping and opportunities to enjoy the performing arts, as you might expect in an area where the Median home price is almost $8,000,000 at this writing. Naples Florida is also one of the safest places to live in the United States with to current crime rates far lower than the national average. Violent crime is especially low here. Student test scores here are substantially higher than the national average. Naples is an all around great place to live and worth looking into. 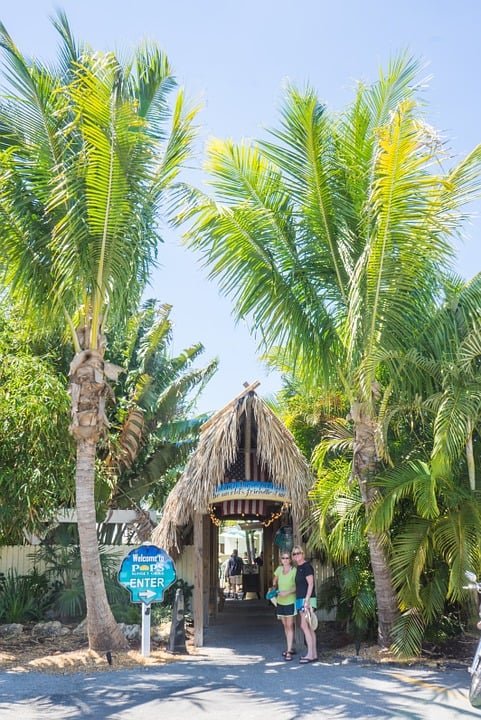 Nokomis Florida is a small little town located just south of Sarasota Florida. Sarasota Florida is the art and culture center for Southwest Florida. Unfortunately according to FBI reporting its crime rates are higher than the national average and therefore not eligible for any of our best places to live in Florida this.

Nokomis is a mix of old and new. Some sections offer a slice of old Florida complete with restaurants and tiki bars the same as it was decades ago. Crime rates are low here. Student test scores are high and the cost of living is about average for Florida. Housing costs here are lower than Florida and the national average, but that’s influenced by a higher percentage of smaller older cottage type homes and manufactured/mobile homes in the town. 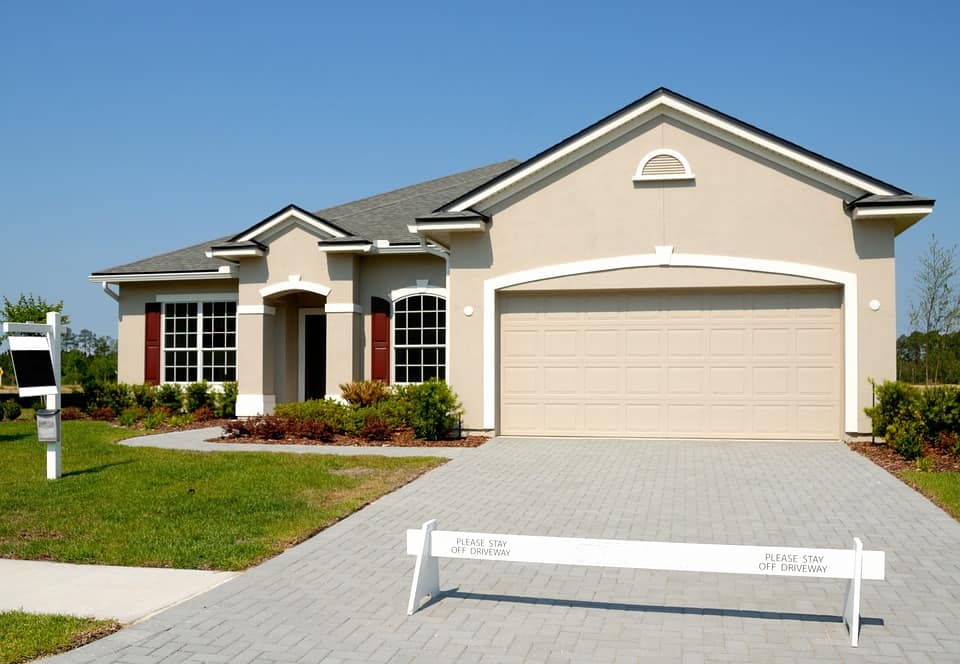 North Port Florida is One of the Best Places to Buy an Affordable New Construction Home.

North Port Florida is located in Southwest Florida less than an hour north from part Fort Myers. High student test scores and lower crime rates and other high quality of life scores make this more affordable place a nice place to live. What’s different about North Port is that it has over 50,000 residents, yet crime rates remain low.

Due to an abundance of vacant lots available to build on, North Port is one of least expensive places in Florida to buy or build a new construction home. The median home price is lower here than the rest of Florida and a higher percentage of the resale homes are newer.

North Port does not have Gulf of Mexico beaches. However it’s just a great place to live in Florida and many of Florida’s best beaches are less than 30 minutes away by car. If you’re one of the many people were moving to Florida and looking for a place to buy a nice home, possibly a brand-new home, for a lower price and in area with good schools and low crime rates, North Port is worth a look. 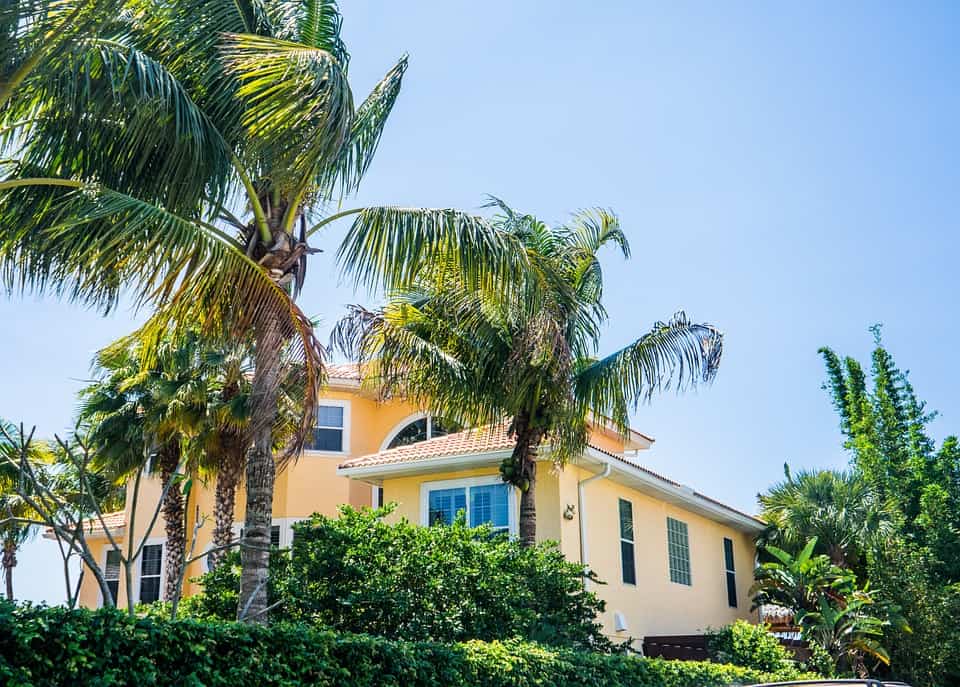 Osprey Florida is located in Southwest Florida about an hour south of Tampa, and just a few minutes south of Sarasota Florida. Osprey Florida is another small town similar to nearby Nokomis in size, which is also on this list, making it easy to check out both places the same day. Osprey Florida residents enjoy high quality of life factors across the board. However unlike its neighbor Nokomis, Osprey’s homes are priced little higher than Florida and the nation as a whole. 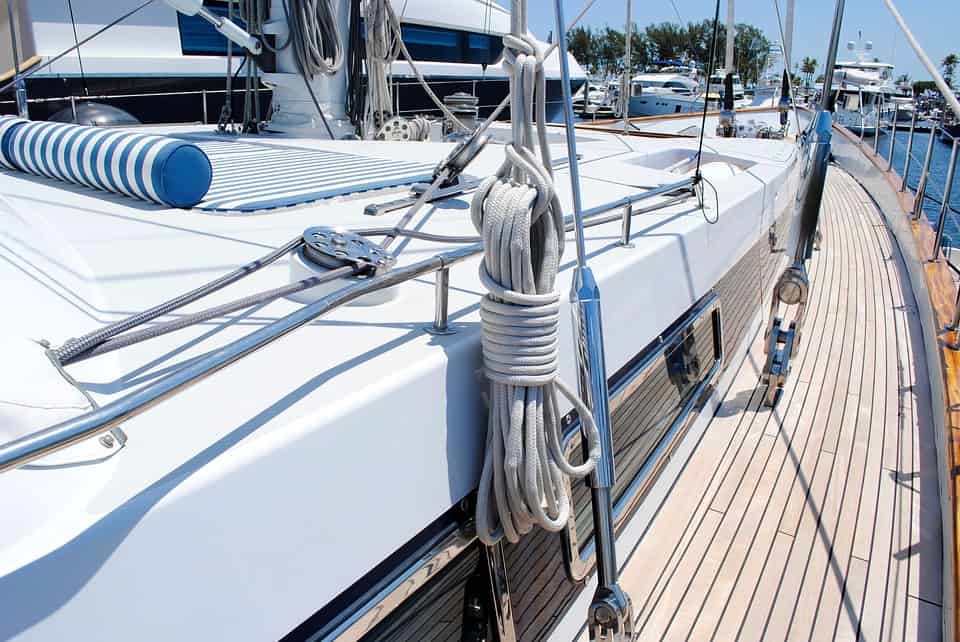 Punta Gorda has Deep Water Canals Needed for Sailboat Access to the Gulf.

Punta Gorda is located where the Peace and Myakka River’s meet and form Charlotte Harbor, just inland from the Gulf of Mexico. It’s about half hour drive north from Fort Myers Florida. Punta Gorda is on our best places in Florida for boating and fishing and our best places for golfing list.

Punta Gorda has a large riverfront park that offers tennis courts, basketball courts, picnicking and more all with a beautiful relaxing scenic view. Just down from the park is Fisherman’s Wharf, which is now a large shopping and dining area that’s under roof. Numerous annual festivals are held here.

Punta Gorda has lots of waterfront properties ideal for both owners. Many waterfront homes here have deep water sailboat access to the Gulf of Mexico. Like all of our best places, low crime rates and other high quality of life scores make Punta Gorda one of the better places to live in Southwest Florida. 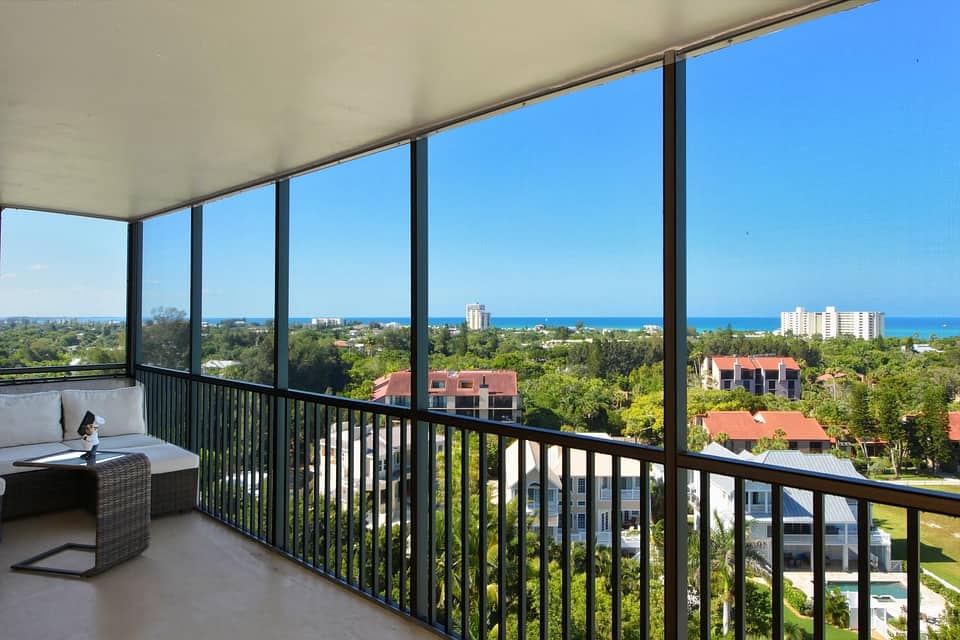 Condo with a View of the Blue Water Gulf.

Venice Florida is about an hour north of Fort Myers Florida and about an hour south of the Tampa St. Petersburg area. Venice Florida is not just one of the best places to live in Southwest Florida but it’s one of the best in the country overall. Venice has a small historic downtown and parks within walking distance to Gulf of Mexico beaches. There are many miles of bike paths in the area including some that connect to the beaches.

Venice has been named to many of our best places every year, all the way back to the beginning of this website. If you’ll be checking out Southwest Florida while looking for a new place to live you owe it to yourself to take a look at Venice. Make sure you visit the island portion of the city which is separated from the rest by the intercoastal waterway. Venice has everything from multimillion dollar beach and waterfront with boating access homes and condos to mobile homes. The median home price here is slightly higher than the national average, but worth every penny.

Please note: I seem to meet younger people no matter where I go in Florida, but the average age in Venice Florida is older than most other places of the state. The joke here is, “Venice is where my grandparent’s mother and father live.”
_____
Ron Stack “That Best Places Guy”