What is the Cost of Living in Florida?

The cost of living in Florida is far higher now, when compared to other states, than it was when our parents and grandparents retired there years ago.

It wasn’t that long ago that you could move to Florida and buy a nice home for far less than you could in most other states.

You could sell in the state you had been living in, buy a similar home in Florida for a lot less and then bank the difference.

That home came with master bedroom suite, split floor plan (master on one side, spare bedrooms and bath on the other side of the main living areas), ceramic tile throughout, a roofed lanai (covered patio), cathedral ceilings, central air, separate laundry room, finished painted drywall in the garage and more.

Homes like this were available in multiple locations in Florida, built by different builders.

Anyway, people could sell for say $169,900 where they were moving/retiring from, buy a home like this and have $100,000 minus expenses to bank or invest.

The cost of living in Florida overall was so low back then, that you could live off of a social security retirement check(s) (that’s how you actually got paid in “ancient” times, by check) and supplement your income when needed from what you netted on your home sale.

It’s no wonder then, that is exactly what many people did. They sold and retired to Florida.

The super low cost of living in Florida has gone the same way as being paid, or paying with, a check. It’s gone and we’re unlikely to ever see it again.

Well, except for a couple of years after economic downturns when Florida’s home prices crash and before the bubble starts to reinflate again (see the Florida Move Guide).

Not only is the cost of living in Florida higher now, it can also increase shockingly quick.

I’ll give you just one example using home prices, because if you’ve been looking, you know how quickly and how far they’ve risen. As home prices increase, so too can your real estate tax bill, which may rise annually right along with your home value.

As your Florida home value and real estate taxes increase, you may have to purchase additional insurance to cover the increased value and or cost of replacement.

Before relocating, it would be a good idea to consider how likely it is that the cost of living in Florida may grow faster than your income.

I’ve have had to sell too many homes over the years in Florida for people who’s expenses grew faster than their ability to pay them.

This happened despite being financially comfortable when they first moved to the state.

Others went back to work (at 75?) to try to make ends meet. Not exactly how they pictured retirement.

It’s Now More Expensive to Live in Florida Than Most Other States.

It might be a good idea to learn if the overall cost of living in the state you now reside, is lower, or higher than it is in Florida.

I’d be cautious about moving to Florida if it was more expensive than where you are now, espescially if you’re secure financially.

Florida is not the low cost of living leader it was for most of the last century. 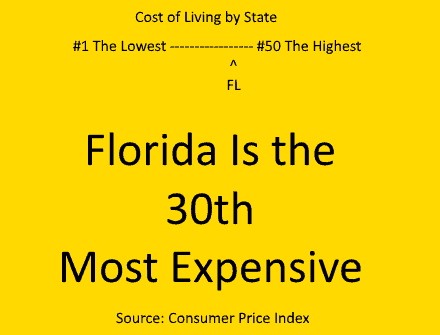 Prior to the year 2003 or so, you could move from just about any other state in the US, to Florida, and expect to find lower housing cost, lower taxes and a significantly lower cost of living overall.

All of that has changed, according to the Consumer Price Index.

However, Florida still has a lower cost of living than the following states, starting with the most expensive first:

Will this list continue to shrink as the cost of living in Florida continues to increase?

As of 2019, Compared to the National Average…

After the record damage in Florida from hurricanes in the prior decade, homeowners insurance skyrocketed. Rates more than doubled or tripled for some homeowners. I again sold many homes for people who could not afford the vastly higher premiums. Suddenly insurance companies wouldn’t touch many properties. They became uninsurable until the state formed an insurance company of last resort for homeowners that had no where else to turn.  That state backed entity is still one of the largest insurers in Florida today and even Florida’s governor has said in the past it may not be able to pay homeowners the promised insurance coverage if a powerful hurricane hits. That home you buy in Florida today could become a place you can’t afford next year if Florida’s hurricane activity continues to return to normal. Remember, hurricane season in Florida is 6 months long, every year.

In many parts of Florida if you use a mortgage to purchase a home, you will be forced to carry homeowners, flood, wind, sinkhole and possible other insurance. Events such as the appearance of yet another sinkhole in November 2013 that is swallowed homes and future events could lead to banks to require sinkhole insurance in areas where it wasn’t required previously. It could also lead to an increase in sinkhole insurance rates for people who already pay it. That could force some people from their homes because they can no longer afford the combined rising cost of insurance in Florida. When to many people need to sell at the same time, that can affect real estate values.

Why should you consider flood insurance or other insurance, even if it’s not required? Because most insurance companies won’t pay for damage caused by “flooding” under a regular homeowners insurance policy. Your homeowners policy may cover damage to your home but not from a flood, sinkholes, etc. The more homes that get swallowed by sinkholes, the more areas sinkhole insurance may be required in order to finance a property and the higher the cost of living will increase. Can your income keep up? See the November 2013 sinkhole story in the video below.

The Cost of Living in Florida, the Bottom-line

The absence of a state income tax may give the state of Florida an advantage over other states, but only for high income earners. If you don’t invest a high percentage of your assets in a Florida home, you probably shouldn’t worry too much about the cost of living in Florida with the possible exception of further flood insurance reform.

If you’ve ever seen people while watching the news who live in a flood zone near a body of water who have lost everything from flooding but swear they will rebuild yet again, what you’re seeing is the taxpayer bailing these people out, through the federal flood insurance program. When they reform this program because the taxpayer piggy bank is broke, these people will be forced to pay flood insurance premiums that reflect the real risk. The real risk is high and growing and once rates reflect this, many flood zone home owners won’t be able to pay.

FYI, most people live along the coast in Florida and many entire communities are in a flood zone. In many areas you can’t buy a home that isn’t in a flood zone because every structure is in one. There are new floods zones being created when water damage from flooding occurs in an area where it hadn’t happened in the past.

Moving to Florida and working for a living or living on a modest fixed living.

People thinking of moving to Florida because they’ve saw someone touting the low cost of living in Florida should do research and proceed with caution because the cost of living in Florida can change faster than just about anywhere else. If you will be working for a living, sure you won’t have to pay a state income tax but you almost certainly will be earning less than doing the same job in the state you moved from.

The cost of living in Florida is determined mainly by housing costs. Move to Florida after a housing bust and whether you buy or rent you may experience a lower cost of living than your previous home state. But that low cost of living will probably be temporary. The problem is that because they are so many people moving in and out of Florida, the state experiences higher highs and lower lows when it comes to the economy and housing.

If you move to Florida today to enjoy a low cost of living, you may not be able to afford it 3 years later. This isn’t your grandmother’s Florida, the days of a perpetual low cost of living in the sunshine state are over for good.
_____
Ron Stack “That Best Places Guy”