Are you thinking of moving to Florida but are worried about hurricanes?

If so, this article will explain the risks hurricanes pose, and show you where the safest places to live in Florida are, to lower those risks.

Here’s why lowering your risk of being affected by a hurricane is important:

Where are the Safest Places Away From Hurricanes?

After watching the life altering negative affects the people of Texas suffered from Hurricane Harvey, I thought about writing a post on where to live in Florida to avoid a similar fate. After reading some of the information on the web claiming to name the safest places from hurricanes in Florida, which I felt was incorrect, I felt compelled to write this post. Allow me to explain why…

The leading search results had included Florida cities right on the coast of Florida that are actually at high risk from a direct hit from a devastating major hurricane. A couple of lists even named a town on an island stuck out in the Atlantic among it’s top 10 “safest” places in Florida from hurricanes. In my opinion, this is terrible advice, bordering on dangerous. Apparently part of the reasoning used for their choices was that if a place in Florida has not suffered from many direct hurricane hits in the past, then it gets a high score.

Here’s the problem I have with that thinking. Just because a hurricane hasn’t made (or rarely has made) a direct hit in a particular town on the coast in Florida in the past, that in no way means that it can’t happen the the very first hurricane season after you move there. The only way such thinking would work  is if you had a time machine and could go back in time and move to one of these very vulnerable places and only live there for the time you knew it wouldn’t be hit. However, if you don’t happen to have a time machine, or it’s broken or in the shop, the list below of the real places to live in Florida to be safest from hurricanes is for you.

To Know What it Takes to be Safe From Hurricanes in Florida, We Need to Know The Different Threats Hurricanes Pose

To learn where the best cities to retire or live in Florida to be the safest from hurricanes, we first need to understand the three biggest threats these powerful storms pose. There are other threats such as long term power outages, downed and possibly live power lines in the streets, etc. that are covered in the Florida Move Guide, but for this post, we’ll concentrate on the 3 most serious threats from hurricanes that Florida residents can face within the first 7 days after the storm makes landfall.

The 3 Most Serious Threats from Florida Hurricanes, In No Particular order… 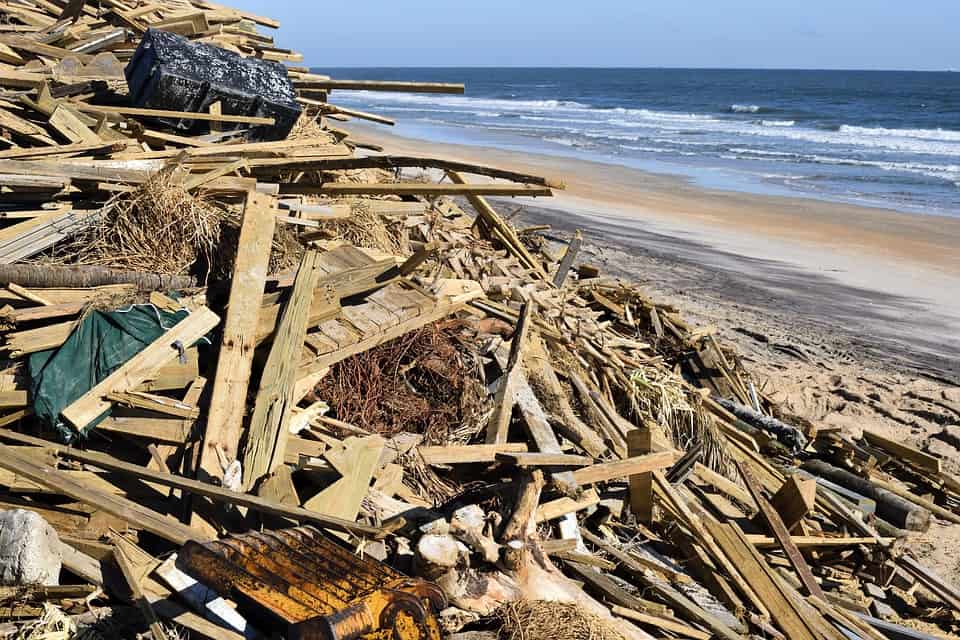 Storm surge is a wall of water that a hurricane can push inland. Tidal surge is storm surge plus the normal astronomical tide (such as high tide) that occurs. This combination can put homes completely under water in areas with low elevation on the coast.

Even if your home is outfitted with the best hurricane resistant windows, doors and roof, if a a wall of fast moving seawater puts it underwater, it will be damaged and would become a life threatening situation. Your beloved belongings will also be affected. To avoid the devastating hurricane threat of storm surge, you could decide to live away from the Florida coast.

There are other advantages of choosing to live or retire to a place away from coast besides reducing or eliminating the chance you’ll be affected by storm surge. The cost of housing, both to rent or buy, will likely be lower inland than a similarly desirable area right on the coast. Often much lower. The closer you live to a beach in Florida the more you will pay to put a roof over your head.

Another advantage of living inland is a lower overall cost of living compared to living on the coast. Paying less for a home will mean you will also likely pay less in real estate taxes. Or your landlord will pay lower taxes so he or she can offer the place for at a lower rent. The cost of homeowners insurance in Florida is the highest of any other U.S. state. This cost is also lower inland for similar areas due to lower risk such as little or no threat from storm surge, compared to properties on or near the coast.

If you don’t live near the coast, you’ll likely be less negatively affected by over 100,000.000 tourist that visit Florida every year. However, living inland does not mean you’ll never be able to enjoy the beach. You can leave for the beach in the morning and enjoy the sand and surf for a day and return home in the evening, from just about anywhere in Florida. The difference is you’ll likely never have the sand and surf in your home.

Safety from a hurricane’s storm surge was used to create our list. 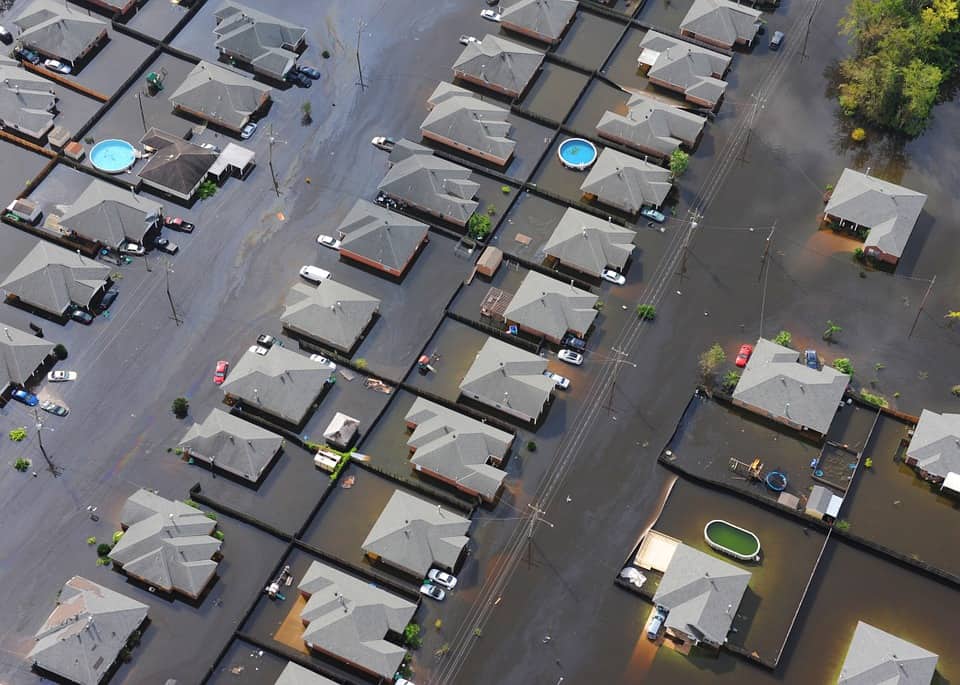 Hurricanes can dump huge amounts of rain in a short period of time. If you’ve seen news coverage of the devastating flooding that Hurricane Harvey caused in Houston Texas in August and September 2017, you’ll probably want to do everything possible to avoid that from happening to you, after you move to Florida.

When people moving to Florida say they want to live near the beach but they don’t want to buy a property located in a flood zone, they are sometimes shocked to learn that the whole area is a Special Flood Hazard Area (SFHA). Even if you buy in an area that isn’t in a SFHA now, that does not mean your home will never flood and the area will never become a “flood insurance required” area, which could affect its resale time and value.

Higher overall elevation was a criteria used in creating this list.

Why? Because every year now, there are homes that are not in designated flood zones but are damaged by flood water causing them to be included in special hazard areas when flood zone mapping is updated. This will cause the homeowners to be required to carry flood insurance if they have a mortgage, which could then make the home unaffordable and more difficult to sell. 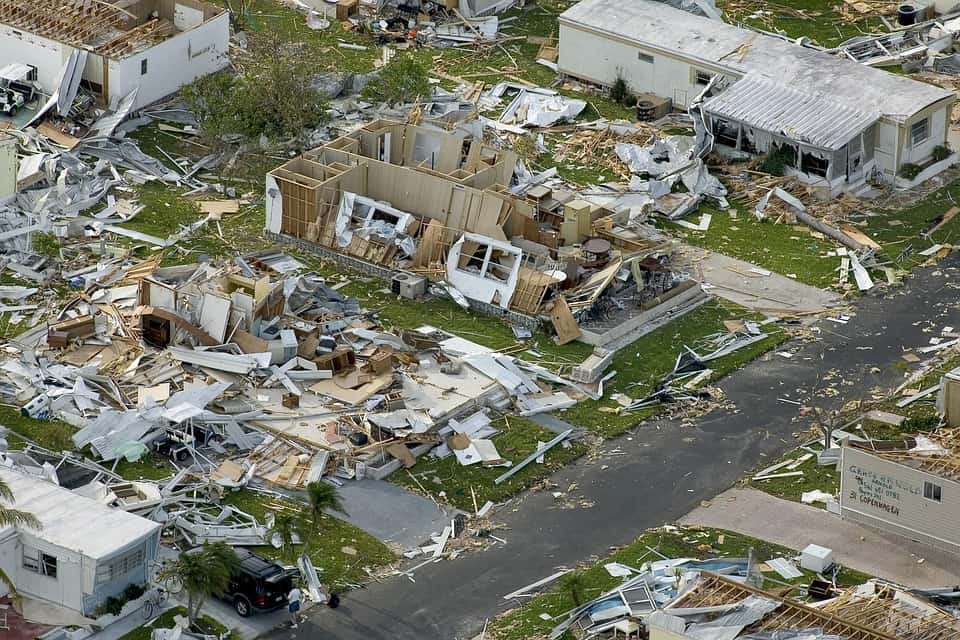 Damage from strong winds is usually the threat that most people associate with hurricanes. Like storm surge, hurricane force winds are usually strongest in the area where a hurricane makes landfall, so living along the coast is where this threat is the greatest.

As hurricanes move inland, they can no longer feed off of the warm water of the Gulf of Mexico or Atlantic Ocean, and so they lose strength. This causes the hurricane to become downgraded as it moves inland. As a hurricane’s winds diminish, so does its ability to cause damage.

Safety from the most damaging winds of a hurricane was considered when creating the list below.

So here they are, in no special order…

Winter Springs Florida is a small city of about 34,000 people. It’s located a half hour drive heading north from Orlando. The crime rate here is much lower than the national average. The city would be ideal for both retirees and families.

Distance from the nearest coast- 35 miles

Watch a video of this great place to live.

Minneola Florida is a small town of 10,000 residents. It’s located an half hour’s drive west from Orlando. Student test score here are higher than both Florida’s and the National Average. The crime rates is substantially lower than the U.S. average. This small town would be a great place to raise a family and ideal for retirees desiring small town living.

Heathrow Florida is a small town of just 6,000 residents. It’s located 30 minutes north of Orlando and less than an hour southwest of Daytona Beach. Unlike Orlando and Daytona Beach, Heathrow has a very low crime rate. Heathrow offers a very high overall quality of life compared to most of Florida. It would be a perfect retirement location as well as for families desiring a safe quiet small town. Note: Housing availability here can be tight because of the town’s size.

Doctor Phillips Florida has nearly 13,000 residents. It’s located just 20 minuets southwest of Orlando. It’s nearly surrounded by many of the area’s famous theme parks. Doctor Phillips offers one of the highest overall quality of life scores in Florida including one of the lowest crime rates in the state. However, the housing cost here is almost double the Florida average. This small city would be ideal for anyone who can afford to live here comfortably.

Best video I could find…

Wekiwa Springs Florida is a small city of 24,000 people. It’s located just a 20 minute drive north of Orlando. Wekiwa Springs offers a high overall quality of life and low crime rate. When shopping for a places to live in Florida to be safer from hurricanes, this city should be on your list to visit but don’t move too close to the area’s rivers or creeks.

Oviedo is a Florida city of 36,000 residents. It’s located about a half hour drive from Orlando heading east. It offers a high quality of life compared to most places in Florida and also offers prospective new Florida residents a crime rate far lower than the national average. Oviedo Florida would appeal to anyone looking for a great place to live that offers easy access to Orlando and Florida’s east coast beaches.

If the chickens aren’t worried about hurricanes here…

Start Here Before Moving to Florida

The Villages Florida Distance from the nearest coast- 35 miles

St Cloud is a city of 36,000. It’s 45 minutes south of Orlando. Home prices here are lower than the average for Florida and lower than the national average. Rentals however, are not as cheap here. The crime rate in St Cloud is substantially lower than the national average. The same can not be said of nearby Kissimmee Florida. St Cloud Florida is the place to live for people who want to be as safe as you can be from hurricanes in Florida and also want to buy a home at a reasonable price.

Here are cities you may have seen on other “Safest Cities From Hurricanes in Florida” type lists that do not qualify for our list, and at least one reason why.