Is Florida or Arizona the Better State for Retirement?

One of great things about retirement is we are no longer have to live within commuting distance of where we’re employed. This gives us the opportunity to live where we want to, versus where we had to most of our lives, because of obligations. In the past, most retirees who decided to try greener pastures in their retirement years, moved to either Florida or Arizona.

If you have been thinking of moving to a state where the nicest weather of the year happens in the winter, this comparison between the two past reigning retirement havens of Florida and Arizona may provide the clarity you need to make a better decision.

Arizona Vs Florida: We Compare 6 Major Quality of Life Factors

The last thing you need to do when trying to relocate to better enjoy your well-deserved work-free years, is move to an area that has a big crime problem. Areas with high crime rates can lower your quality of life by increasing your stress levels at a time when you deserve to be more care free. High stress levels can affect your health and lower your overall quality of life.

Rising crime rates usually leads to paying higher taxes to fight the problem. Rising crime rates can lower property values and cause homes to become difficult to sell. Even sunshine, palm trees and pools won’t help a sell a home in a high crime area.

According to police department reporting from both states to the FBI in a recent year, Arizona has a lower violent crime rate than Florida. But not by much. Florida had a lower property crime rate in the same year, but again it was by a small margin.

The unfortunate news here is that both Arizona and Florida had crime rates much higher than in most other states in the country. So that means that if you move to Florida or Arizona, chances are you’ll be moving to a state where the odds of becoming a crime victim will increase. But there is some good news.

Both Florida and Arizona have towns that are fun places to live and residents that live in these great towns enjoy low crime rates. So the good news is that you can still move to Florida or Arizona and live someplace that is just as safe, or safer, than where you are moving from. However, this requires some proper research and planning.

You can do that by choosing a town from any of the best places to live in Florida lists on this site for that state, or chose a best place to live in Arizona from this list.

2) Quality of Healthcare: Florida vs Arizona… The Winner? Florida

Like crime, both Florida and Arizona score poorer than most other states in healthcare quality according to the U.S. Agency for Healthcare Quality and Research. Florida scored slightly higher than Arizona in the recent year we researched but the difference was so small that it’s likely insignificant.

Many people believe that relocating to a state with no personal income tax will save them a lot of money in taxes. The truth is, all states need money to fund the government and pay for services like roads and police protection. States that don’t collect a personal income tax make up for it in other ways like higher sales taxes and or fees, like when you pay to renew your car registration.

In the recent year we used for this post, Florida’s overall tax burden was only slightly less than Arizona’s. For low to moderate income taxpayers, the overall difference in what you would pay in taxes won’t likely be much different in the two states.

Taxpayers with higher incomes will likely save a substantial amount in taxes with their primary residence located in Florida. We suggest you talk to a CPA or other tax professional licensed in the state you are thinking of moving, if reducing your tax bill is an important consideration.

4) Days of Sunshine: Florida vs Arizona… The Winner? Arizona

Ok, the very reason that Florida and Arizona are known as retirement havens is warm weather during the winter when it’s cold in most of the rest of the country. In order to have warm days you need sunshine. Besides, how appealing would a warm place be if it was gloomy and raining most of the time?

The State of Arizona has a significant advantage over Florida in the average number of sunny days per year according to the National Oceanic and Atmospheric Administration or NOAA.

If you are someone who hates cold and snowy weather, it’s hard to beat the warm weather you can enjoy in both Florida and Arizona during the winter. Even Florida experiences lower humidity during this time of year. However, it’s the high humidity that can make Florida uncomfortable to be outdoors for most of the rest of year. That’s rarely a problem in Arizona where the average annual humidity is far lower according to data provided by NOAA.

6) Do People Living There Now Like it?: Florida vs Arizona… The Winner? Florida

Just like crime, healthcare and tax burden scores for both states, the difference in resident satisfaction of people already living in Florida and Arizona, isn’t much. According to a Gallop national poll, 41% of Arizonians said Arizona was either the best state to live in, or at least one of the best. In Florida, 46% of Floridians felt that way about their state.

It would be important to note that most residents in both Florida and Arizona did not feel their state was the best or even one of the best states in the U.S. in which to live, according to the poll. To give you some perspective of how those numbers compare to other states, 77% of the residents of Montana answered the same question about their state positively. 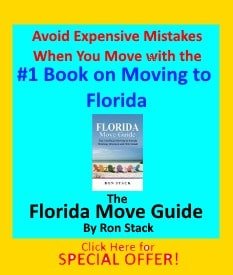 So is Arizona or Florida Best for Retirement Overall?

Quality of life data as well as resident polling shows that neither state has a significant advantage over the other, until you consider weather. If the main reason for moving to Florida or Arizona for retirement is warm weather, then Arizona may be a better choice because you will enjoy far more sunny days living in that state. Arizona also has far less humidity than Florida, so you will likely be able to more comfortably enjoy the outdoors and all of that additional sunshine.

Florida verses Arizona for Retirement Other Points to Consider

5 thoughts on “Florida Versus Arizona for Retirement”